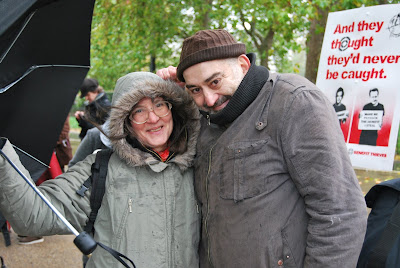 David Kessel was born on the 2nd of April 1947 in Harlesden, in the Borough of Brent, North-West London.
He suffered a breakdown at 17 prior to medical school. With diplomas from the RCSP, he went on to practice as a GP in East London until his second breakdown put a halt to his medical career. In spite of his illness, David continued writing poetry and published The Ivy in 1989 (Aldgate Press; reprinted 1994).
His poems have appeared in the Phoenix Co-Operative, Poetry Express and the anthologies Where There's Smoke, Hackney Writers, Outsider Poems, Bricklight – Poems from the Labour Movement in East London (Pluto Press, 1980) and Under the Asylum Tree (Survivors’ Press, 1995).
They have also been put to music by the EMFEB Symphony Orchestra in Owen Bourne’s score Hackney Chambers. The publication of The Windows of the Bookshop Must Be Broken – Collected Poems 1970–2006, designed and edited by Alan Morrison (Survivors’ Press, 2006) proved a best-seller. A selection from this volume was recently published in a bilingual German-English volume, Außenseitergedichte (Verlag Edition AV, 2007). 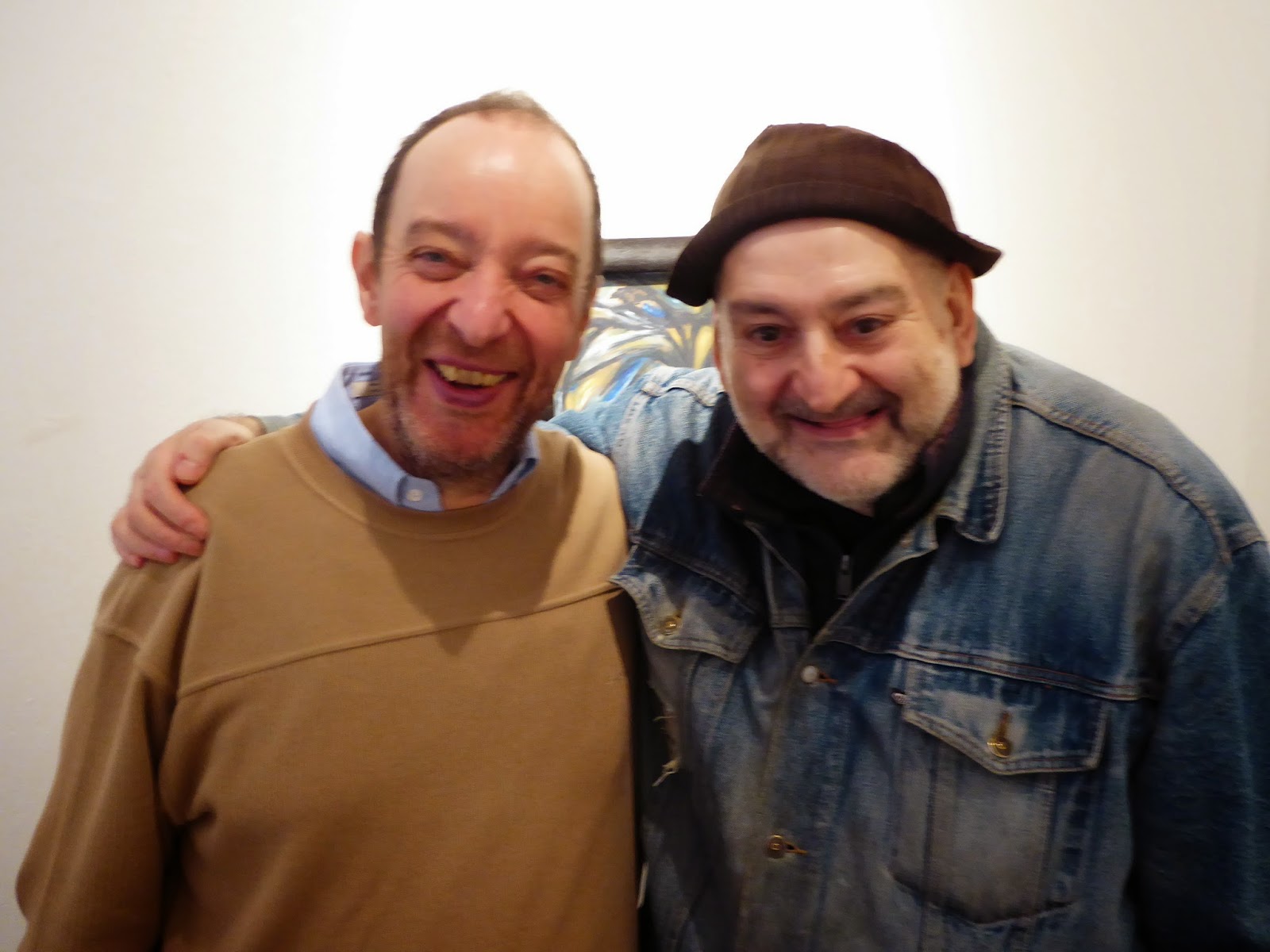 David with fellow friend Dr Peter Barham while visiting the

In 2012 David wrote the foreword for the collection of poems Waters of the Night – Complete Poems 1974-84 by Howard Mingham.
Howard and David used to attend the Hackney Writers’ Workshop, which started to meet at the Centerprise Bookshop in Hackney in 1976. When Howard passed away in 1984, David collect and preserved Haward's poems that got firstly published for a memorial event in November 1984.
The 2012 edition came about after two more of Howard's poems were discovered. 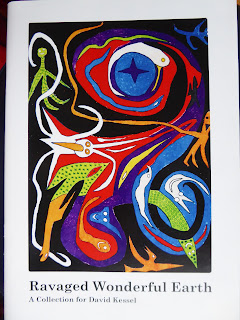 In 2013 the "Ravaged Wonderful Earth - A Collection for David Kessel" book was created by a collaboration between the Outsider Poets and F.E.E.L.
This was launched in the Wenthworth Stanley Hall, within St Clements Hospital, in July 2013 during the soft opening of the Shuffle Festival. Here some footage of David performing on the occasion www.youtube.com/watch?v=f3BW8cWmVpo

David became a proud grandfather in 2013; he continues his support in campaigns for mental health patients' rights
while writing poetry in his flat in Stepney,


Find here more information about David's work and some of his poems: 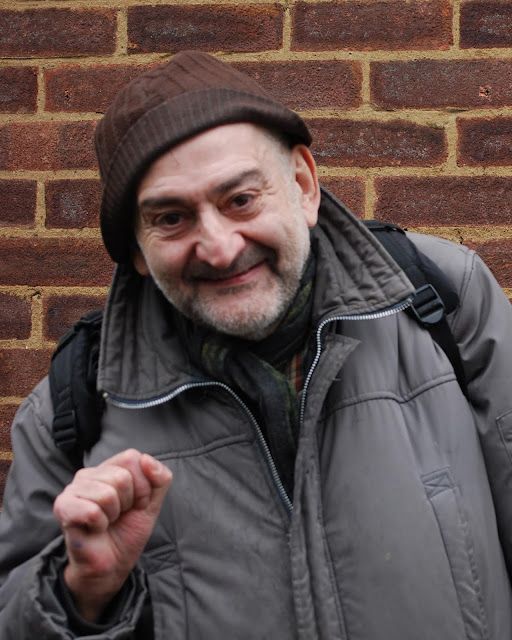 Came to love London streets
and hummed an anarchist's lament

At heart-rending Peckham Rye
ask What, How and Why?
The kingdom of the dead
or living commonwealth?


We think with our shoulders.
On the lime-quarried hillside
Down a stony lane lined with ash and hazel
A poor disused chapel where
Fierce hymns give men courage.
Hardship on this hillside, riven
By lime and bracken, thistle and scree.
A cold, slow rain on a cottage in the dell
Mortared with the blood of quarry
men hill-farmers.
Sheep grieve above the oak wood
Where a mistle-thrush storms hell.
A feral cat hunts the black redstart;
so rare, so shy.

November beeches aflame, as many
Fallen leaves as slain quarry men.
Resistance of pain in the chest and spat gob.
From a dry-stone wall, jenny wren’s song
Holier than remembrance.
Dangerous to take the sheep track at dusk.
The blessedness of February wind
Through an old goat-willow.
Here men pray with their stomachs:
The gnarled upland cabbage in
A broth with barley
The language of hunger: an alcoholic’s lack.
The fox and the crow pick the dead lamb clean.
Springtime in the valley and the hawthorn blooming.


The east wind of high summer.
Old men with cider bottles,
And I suddenly an old man.

Through the slums with Jesus,
Black, broken hearted, golden Grace.

His heart away at street corners
to the young alki: cursing, skint.

Bengali dawn
On the Whitechapel waste.

The Gestapo will pass-
There shall be silence
Broken by cawing crows
and the vixen's cry.

Strong as our pain is strong,
Our children are.

A savage peace,
The rain over Stepney.


In an East End park I smoke to death.
Do I care or take the piss?

Fury in the heart of an old timer;
Hanging and idiocy – English Fascism!

Toffs think life's a game;
The “shagging dead” I call them.

“White Power” - a cockney tragedy;
A mug of tea the colour of blood.

Will our great sea-faring nation come to this:
A Bengali lad, stuck in the gut, then pissed on?

Working class internationalism as rare
And wonderful as the black redstart.

Never so happy as growing old with
A loved one in a quiet council flat.

A low grey sky over Bethnal Green
And a cockney lass's whistled song.

The sweet surge of heroin in a cold back room,
Smell of nuclear wind in the morning,
And the aftermath, alone as never before!

Addicted to life, all life, we may withstand.

Huge-hearted Pat Walters in a Hackney street,
Arguing and singing her black gospel,
Martyred by our indifference.

Wry humour of Turkish voices from an alleyway.

A trendy genocidal English gent in a fight with
ECT-wracked O'Donnel with his ruby courage.

Being hard to survive, tender to live.

And Copernicus, who transposed his lust
Into such wonder for a few naked years.
Hunger half of life, respect the other half.

The pain of London pavements and sleet across Scafell.

"Can't you see buried within all that wreckage, his craving for freedom" Malcolm Lowry

Schizophrenia is a diabetes of the mind which might be caused by a traumatic disbelief and lack of intimacy in childhood and adolescence.
We are misunderstood and stigmatised and become subject to a mental health system which often invalidates us and takes away some of our civil liberties.
People like us are often used as scapegoats by society and guinea pigs by the drug industry and other forms of social control.

Our's is a dirty job and somebody has to do it. We may become the "new Jews", a butt of rising fascism. We need mutual support groups for discussion, therapy and protection. Get in touch and we'll be happy to meet you.